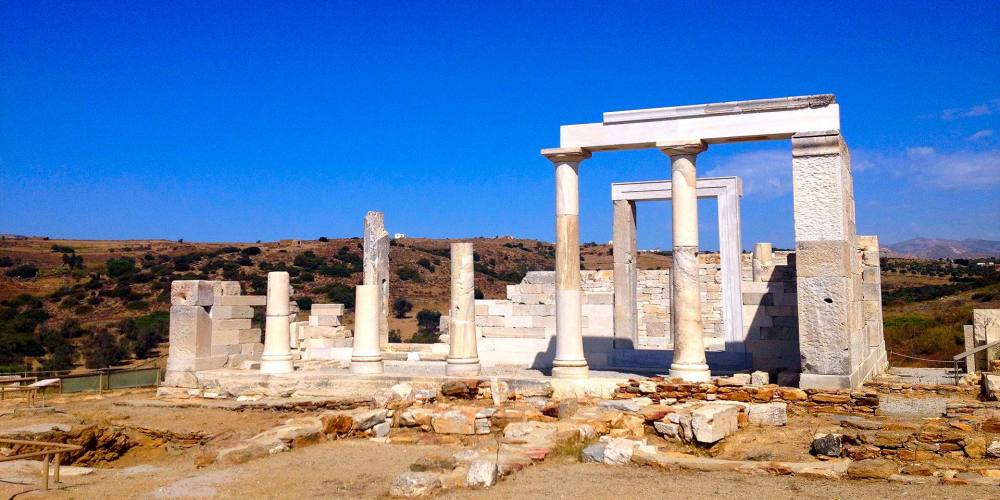 On a mound hulking over the beginnings of a fertile valley in the Gyroulas district, south of the village of Sagrion Naxos, the inhabitants of the area began worshipping (outdoors) the deities of nature in the 8th century BC.

A monumental, all-marble temple was constructed at the spot in the late 6th century. According to a number of indications, the sanctuary was dedicated to the deities of Apollo, Demeter and Kore, with an emphasis on their earthen characteristics.

The worshipping of earth deities, which was related to fertility and the growth of vegetation, is deduced by the erection of the sanctuary in the midst of an area rich in productive resources and appropriate mainly for farming.

The sanctuary also served as a factor of social cohesion in the broader district, besides being one of the most significant steps in the development of classical Greek architecture.

During the paleo-Christian period (5th-6th century AD), the temple was converted into a basilica.

Up until the 8th century, when it was abandoned, a variety of workshops were developed around it, for the production of olive oil, wine and ceramic items.

Later, the worship was resumed in the small chapel of Agios Ioannis Theologos (St. John the Theologian), which was built under the arch of the ruined basilica.

The chapel was moved to its present position in 1977 so that restoration work could be carried out in the ancient temple.

The project was part of a research program that involved the University of Athens and Technical University Munich (Technische Universität München).

The most important finds from the excavations carried out are housed in the building of the Museum Collection very near the site.

The Vallindras distillery, which has pioneered...

The village of Apiranthos is built at the...

The most impressive sight in the ancient...

The Εggares Olive Press Museum in the village...

On a mound hulking over the beginnings of...

For more destinations or custom tours

Can't find what are you looking for or do you need assistance?